Imagine that you had only a day and a half to explore a bustling city of more than four million inhabitants. What would you do? Could you get to its essence?

In just a little more than 24 hours, I managed to see the entire central part of Mexico’s second-largest city with just my own two legs to carry me. This post will share some of the highlights of my walkabout in Guadalajara, Mexico.

Guadalajara is a Patchwork Tapestry

My walkabout began from my Airbnb near Avenida Chapultepec, which brackets the western edge of the central area of Guadalajara. The first and unavoidable observation I made is that GDL is a mix of old and new. Fresh paint and contemporary design stand side-by-side with crumbling exteriors and graffiti-covered walls (both the artistic and the disappointing kind).

As I zig-zagged east through residential neighborhoods dotted with little cafes and also what looked to be trendy late-night restaurants and drinking establishments, I was fascinated by the lack of cohesiveness. Some of the streets I walked were quite disheveled, but they felt safe and the surprises I found around every corner made this patchwork tapestry fun to weave.

The first intended destination of my walkabout was to reach MUSA, Universidad de Guadalajara’s museum of art. As with the city-streets, I was consistently put off-guard by the exhibits in this museum, which were both beautiful and ugly at the same time.

The temporary exhibits featured three artists, all known for their morose and sometimes disturbing work. The first wing I entered was full of moody, surreal images of dogs that illustrated a short-story written by Miguel Cervantes, author of Don Quixote. Another, featured the work of Otto Dix, whose paintings are known for depicting the harsh realities of war.

Perhaps the most beloved artist of Guadalajara is featured both with a temporary sketch exhibit and as a muralist in one of the building’s main auditorium. Jose Clemente Orozco was a very politically-minded Mexican socialist, who works often depict the struggles of the masses, such as in “The People and Their False Leaders” (pictured below).

Along with Diego Rivera, Orozco’s murals are some of the most coveted in Mexican history and are known throughout the world. Though I found the art at MUSA during this particular period to be too dark for my taste, the quality is undeniable and entry is free. At the very least, a stop to see the Orozco frescoes in the inner chamber is worthwhile.
Note: Some stays, tours, passes, and meals were provided at no cost to the author. As always, all opinions remain my own. I hope this article is useful for you.

The Downtown Core of GDL is a Labyrinth of Treasures

From MUSA, my walkabout continued through the city-center, where promenade after promenade led me through bustling streets and along old, stone cathedrals and administrative buildings. I particularly enjoyed the promenade leading to Plaza de la Liberacion, with its playful fountains leading the way.

Where there are promenades, there are usually parks, and GDL has quite a few from which to choose. Many are more like plazas than parks, with stone or concrete meeting points surrounded by tree-planters and a few flower-beds. There are some great exceptions though, such as the one pictured below, which is called the Rotonda de los Hombres Ilustres. This green park with its attractive columned centerpiece pays homage to famous citizens of the state of Jalisco, of which Guadalajara is the capital.

Like in Mexico City and other places in Latin America, parks in Guadalajara are also a good place to pick up a five-minute internet connection to get your bearings while having a sit and resting the legs. You can access this free wifi by entering an email address or logging in to your Facebook account, but don’t dawdle! Free internet is tracked by a device, so you’ll only receive a maximum of two five-minute connections per location.

A few blocks beyond La Rotonda de los Hombres Illustres, I found Guadalajara’s famous market. San Juan de Dios Market is an absolute maze of handicrafts and other goods for sale and is a culturally important part of GDL. Multiple levels, stall-after-stall, the small businesses displayed anything and everything a person could think to buy.

While I didn’t need anything, I still spent at least half an hour in the market, trying to soak in some of its liveliness. These are the sorts of experiences that give the traveler a more complete understanding of a place, so I was thrilled at the opportunity to roam every corner.

Avenida Chapultepec is a Thumping, Heaving Night-Time Flurry of Activity

After returning back to my Airbnb via MiBici (Guadalajara’s bike-share program), it was time for a siesta. Round two of my 24hr GDL walkabout was aimed at exploring the nightlife around Avenida Chapultepec and proper preparation was much-needed.

Tapatios, as the people of Guadalajara are called, share (and perhaps exceed) their Mexico City counterpart’s propensity for night-time merrymaking. From my path through the pedestrian pathway in the center of Avenida Chapultepec, live music and Latin hits called at me from every establishment.

My first stop was a place called Hudson, a bar and restaurant that features live rock music almost every night. The band playing during my visit turned out a mix of classic and 90’s rock covers at full-volume.While Hudson’s probably not the place to go for conversation, there are many places for that along Chapultepec. Groups of friends and couples out on dates absolutely swarmed nearly every bar and restaurant down the mile-long corridor from 8 pm until the early morning hours.

One favorite I visited was a rooftop bar near my Airbnb called Pinta Negra. The establishment had several levels, but to enjoy the warm summer air, head straight to the top. As with other places I visited in Guadalajara, beer and food were both inexpensive and satisfying. Who doesn’t want a $3 liter of beer on a rooftop, surrounded by happy people swaying and swooning at 1 am?

In Guadalajara though, many people on Avenida Chapultepec aren’t content to end the night just yet. Following a large crowd and with some local advice, I discovered GDL’s underground club scene.

Descending a concrete staircase to what felt like an underground bunker, I found myself amongst the more edgy, young Tapatios, for whom the end of the night might actually come with the daylight. Electronic music leaning towards the hardcore end of the genre pulsed in the dark, cavernous environment with futurist (or apocalyptic!) lighting.

Just as Club Bar Americas was hitting fever-pitch in the wee hours of the morning, I decided it was time to end my evening explorations. I’m certain many stayed until the 5 am closing time, but how many of those walked the entire city-center in the same day? I was happy for the quick walk back to my accommodations and a comfortable bed.

The Ideal Place to Stay for a Guadalajara Walkabout

Jose Luis’s apartment definitely drew my eye as one of the best-looking in all of Guadalajara and I couldn’t have been happier in-person. The interior is well-designed and artistic, and the apartment features conveniences like a washing machine and keyless entry. A 24/7 doorman gives you that extra sense of security.

With two bedrooms and bathrooms, this place would be as perfect for four people as it was for my solo trip.

If you’d like to book Jose Luis’s place, you can find it here on Airbnb. His property manager Leticia was very accommodating in waiting for me when my bus from Puerto Vallarta was delayed, and though she doesn’t speak English, she made me feel totally at home in this beautiful apartment. 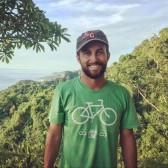 Having visited 45 countries by the age of 30, Trevor possesses a wealth of knowledge on the ins and outs of travel. In particular, he enjoys the logistics of travel and finding little-known gems amongst even the most well-trodden destinations.
View all posts by Trevor Thorpe »