In many ways, Sweden seems a little like a dream – its pride in its storied history, focus on sustainability, and stunning landscape is more than enough reason for you to visit. After all, it is what Sweden is known for!

Whether you are figuring out, possibly, what to see in Sweden, or some of the things to do in Sweden with your time, this piece is dedicated to you. Read on to explore this wondrous country.

It sits in the middle of a lake and has little indicators of the countries they face etched into its face. Wherever you’re coming from, there is no faster way to claim you visited three countries within the same minute as this. Definitely, a thing to do in Sweden, Norway, or Finland!

In my opinion, there is no failsafe activity to do in Sweden like museum-hopping. With its freezing winters and bright summers, this is one that you can enjoy year-round! Whether your muse is modern art or a slow walk down history’s lessons, there is one perfect for you.

The Swedes are well-known for their pride in their storied history and their museums reflect that to a T. My personal favorite was certainly Fotografiska, a photography based museum in central Stockholm. Each gallery tells a story and I genuinely enjoyed it there.

Treat Yourself To A Culinary Experience

After having traveled the world over and acquiring the best of everything, the Vikings settled back into the Nordic country. Because of that, Swedish food ranges from some of the most exquisite, to the downright disgusting (Surströmming, anyone?)

Camp Ripan is such a place. Having perfected their craft with Sami, Torne Valley Finnish, and traditional Swedish influences, you are in for a treat. You will have a hand in preparing the meals, while they have the say in the complementing wines, which really does make for a fantastic evening.

Eating good food and being merry is surely on your list of things to do in Sweden, right?

Pick A Lake, Any Lake

Across the Swedish land mass sit more than a few bodies of water – Sweden has more than 96000 lakes! Anywhere you go throughout the country, you are almost certain to come across at least one or two of them.

If you enjoy fishing or bird-watching, you are in luck! Fishing is free in Sweden across all its lakes (some of its fish have limits placed on it, no nets allowed) and local birds are often spotted hunting for fish along its shorelines. With crystal clear waters like these, who could resist?

Oh, and there is also the issue of Utter Inn.

This unique underwater hotel opened in 2000 to the coldest, rainiest day that summer. Nonetheless, the little room has gone on to be a massive success, with its little red hut sitting quaintly above the waterline, while the bedroom snuggles just below, giving you a panoramic view of the water world underneath.

Art takes many forms, and this is one that I am 100% on board with!

Speaking of water, why not sightsee the country’s capital by boat? It is, at its very organic, an archipelago, so, surely, the best way to experience it is by its inlets and channels, right?

Not only are you to access the boats if you purchase a travel pass, you will be able to travel on their buses, too! The Swedish government has worked very hard to ensure that its capital has the ease of access it deserves. Hop on, hop off, and explore the city!

There are, admittedly, quite a few palaces around Europe, with Scotland’s being arguably the most celebrated. This does not mean you should at all overlook the ones right here in Sweden – let me introduce you to Drottningholm Palace.

Having made its way home in the UNESCO World Heritage List, it is by far the best preserved of its kind in Sweden from the 1600s. Its architectural style was obviously influenced by the royals at the time, with a slight touch from its French prototype.

The palace proper is still in use today, housing today’s Swedish royal family. Its palace theater is also the most well-preserved 18th-century theater in Europe, while still using many of its original stage machinery today. It still holds performances in the summertime.

Drive Across The Øresund Bridge

Having only recently opened in 2000, this bridge genuinely looks like something out of a dream. Its 16km length is half out of the water, where it connects to an artificial island and disappears underwater, where it meets a tunnel that accounts for the other half.

Not only does the artificial island serve as a gateway for the bridge to vanish, but it also houses quite a number of Sweden’s native flora and fauna!

After all is said and done, you may have run out of things to do in Sweden. This bridge is probably the best, quickest (10 minutes) solution to your problem. Drive out from the other end and you will arrive smack in Copenhagen, Denmark. Start your new adventure here!

Whatever it is that you enjoy, there is no doubt that there is at least one thing for you to do in Sweden. The country is filled with mind-blowing history, impossibly clean lakes, and lovely, accommodating people. What more could you ask for in a holiday destination?

I hope you enjoyed this piece and please do comment below if you feel like I missed anything – tell me about your favorite thing to do in Sweden. 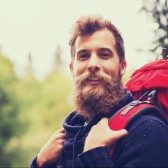 James is the founder of Gotoawesomeplaces, where he shares his experiences about traveling, destination information, and adventures. Visit Gotoawesomeplaces would help your trip easier and have more bonding experiences.
View all posts by James Wilson »