Belize, formerly known as British Honduras, is an independent country located just off the coast of Central America. The country is located between Guatemala to the west and Mexico to the north. The mainland’s approximately 180 miles long and 68 miles wide. In other words, Belize is a beautiful country filled with endless attractions for visitors to explore. I recently took a journey to Belize.

When my mother (a Belizean native) and I went to Belize to visit family, I was instantly drawn to the unique mixture of people. The Caribbean crystal clear blue waters just added to the beauty the country had to offer. To say it was one of the best travel experiences I’ve ever had is an understatement.

Feature photo by dronepicr for a journey to Belize.

The Belize airport was so small, almost identical to a bus station in a big town. I remembered walking around the airport shops and thinking how cool some of these artifacts were. Some of the items included ashtrays, lanyards, shirts, small drums, and footwear. The best part? All of these artifacts were made by hand, and cheap too. I have to say, I never thought I’d be flying on a 10 seater airplane sitting directly behind the pilots in the cockpit, but that actually happened. “Tropic Air” took us from the mainland of Belize City, to Dangriga Town, commonly known as Stann Creek to locals.

The first destination was, of course, my grandmother’s house. Once we arrived there, my mother and I drove around the city and got to visit family members we hadn’t seen in years. Driving around my mother’s hometown opened my eyes to a whole other way of life. In Belize, people didn’t really care about smartphones, the internet, and top of the line cars. Instead, the community focused more on taking care of their families. To put it another way, each family member played a role within the household. For instance, the children would go to school, and since the Belizean government doesn’t offer free education, it was vital that they passed all their classes. Otherwise, you might just witness the parents chasing their kids around with a belt.

The parents’ jobs were to make sure everything was in order. In other words, keeping the house in one piece, making sure their children had something to eat, and making sure the bills were paid. Simple, right? Well, since Belize is known as a relatively poor country, this is easier said than done. If the grandparents were still around, their jobs were to provide wisdom to the family and be a second set of eyes within the household. No one disrespected the grandparents.

After driving around the city and seeing everyone, my family thought it would be a good idea to visit Tobacco Caye. The small island appeared to be something that jumped straight out of a postcard. The mud floor ingrained with smooth pebbles, the bamboo framed bed with mosquito nets, and a wooden ladder up to the loft. The best part, the bathroom was outside, with four walls with an open top where trees hovered high. Another thing I couldn’t help but notice was the power supply. The entire island ran off generators. This meant that if there was an emergency, and the generators stopped working, we wouldn’t have light to make a safe and timely evacuation possible. Luckily, everything went according to plan while we were there.

To go from one part of the island to the next was, in itself, a mission to look forward to. Although the road access wasn’t great, the water taxis made up for it. They ran on schedule every few hours and charged a minimal amount. All we had to do was stand near the pier and switch on a blinking light facing the ocean and wait for the fast engine boats. Once they noticed the blinking lights, they would come on by to pick up passengers; green lights to travel right and red lights to travel left. Believe it or not, traveling with random strangers was a blast. Some of the people I met were locals just wanting to get away; others were tourists going downtown to purchase countless souvenirs.

When we left Tobacco Caye, some of us were still in the traveling mood. This led us to the highly regarded resort Matachica Resort & Spa as our third and final destination stop. The resort spans an enormous 360 acres of Maya mountains. It offered a variety of options when it came to sleeping arrangements that ranged from upscale suites to medium priced cottages and tree houses. My family, of course, chose the cheaper option to stay adventurous while also saving money. The resort offered a wide variety of things to do that included hiking trails, birding, visiting a butterfly farm, seeing the Natural Museum, and taking a tour through the rainforest. The fact that this beautiful resort was established in the middle of nowhere, by a regular couple, is a crazy story in itself.

On the last day, my family tried to canoe down the Macal River, sitting mostly silent and taking everything all in. Our guide who took us around was born and raised in the small village nearby, and he was proud to call it his home. It was quite humbling to hear the man say, “This is my home, and I wouldn’t want to be anywhere else in the world right now.”

I guess that last line from our guide sums up my trip in beautiful Belize.

Until next time when I have another story to share, bye for now.

A Couple Traveling Tips for Your Journey to Belize

If you decide to take your own journey to Belize and visit tourist sites, make sure you take the following:

A camera: No, not the camera on your phone. A good one that snaps multiple clear shots in just a matter of seconds. Whatever the case may be, just remember to allow your subject to be free in their own movement; the shot you take will feel so much more powerful. You never know when you’ll come across those breathtaking moments out in the wilderness.

Guide books: Although we had guides with us during our resort trip, guide books helped us tremendously. If we didn’t have it, we would have simply missed out on so much. Plus, it provided us with a detailed map of the hiking trail in case we got separated.

Bug spray: I cannot stress this enough. This was by far the most important thing I brought with me throughout the entire trip. The mosquitoes in Central America seem to never stop buzzing around you, looking for weak spots on your body to latch on. Make sure you bring lots of insect repellent.

Thanks for checking out the article. Have you ever taken a journey to Belize, or anywhere in Central America for that matter? If so, what were your experiences like? Feel free to leave comments below.

Davis enjoys taking full advantage of the nice sunny weather outside. In his spare time, you can find him playing football, hiking up trails, or cheering on the Denver Broncos. Follow him on Twitter at @Davis241. Thanks for your story on a journey to Belize! 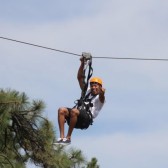 Davis enjoys taking full advantage of the nice sunny weather outside. In his spare time, you can find him playing football, hiking up trails, or cheering on the Denver Broncos. Follow him on Twitter at @Davis241. Thanks for your story on a journey to Belize!
View all posts by Herman Davis »